This clip was shot in 2011 for My (now closed) lingerie paysite. This is such a sexy satin clip that I had to bring it out from the archives. With My shiny green satin blouse and gloves, I’m wearing a purple suede skirt, high heels and Full fashioned (seamed) stockings. Stocking leg lovers will also enjoy this clip as the first 2 minutes are focused more on My legs (full head to heels standing and then a closer view from the waist down). Then I sit down and cross My legs a few times while putting on My green satin gloves. you can see that the blouse is a little too tight and the buttons are straining a bit to not pop off! A very sexy blouse, glove, leg, satin tease clip! (There is no speaking in this clip–but you can really hear the raspy sound of My nylons when I walk around.)

This clip made it to #1 in the Blouse Fetish category:

New in My clips store today: Leather and Satin

The contrast of tough, black leather and silky, shiny satin together is a combination of masculine and feminine. The 6 inch high heeled lace-up thigh boots I’m wearing in this clip, I also wore in My Leather Mistress video. Watch Me walk back and forth in them and cross and uncross My legs. With the boots I’m wearing a black leather corset, a white satin blouse, long black leather gloves and a gray satin pleated skirt. Leather, satin, gloves, extreme high heeled thigh boots and a tight laced corset = a fetish dream!

This is another sneak peek from tomorrow’s video update… 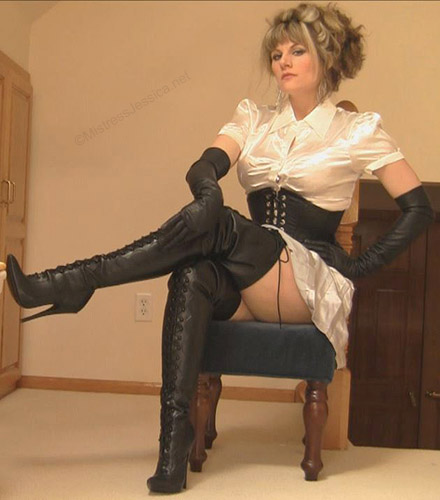 Watch Me Trying on Satin Gloves

A clip of Me in a satin blouse, trying on a couple different pairs of long satin gloves. 1280×720

Just another pair of Fancy Vintage Stockings from My vintage stockings collection.

Damn this is a sexy clip! Well only if you think things like THIS are sexy: ass-hugging tight pencil skirt, satin blouse, metal tipped stiletto heels, Fully Fashioned (seamed) stockings, long satin gloves, the sound of high heels on hardwood floors, garter bumps seen through a tight skirt, hands in stocking tops, nylon feet, crossed legs, lace bra peeking out of a open blouse and stockings being stripped off. And if you don’t find such things alluring, well then you are obviously lacking in good taste! 1280×720

More of My garter and stocking video clips HERE.

Going up tomorrow morning in My Clips4Sale store….

I do enjoy exploiting weak men and their fetishes and one of My co-workers has a thing for My legs. Once I discovered this, it was fun to tease him, while pretending not to notice his attention. But I soon realized how I could set him up and use his little leg fetish to My advantage. Now I’ve got him wrapped around My little finger…….. IN THIS CLIP: Full Fashioned stockings–LEGS–Tight pencil skirt–crossed legs–shoe dangle-blackmail-satin blouse.

I wanted to write more today, but it’s been a long day and I’m tired.

I’ll tell you something
I am a wolf but,
I like to wear sheep’s clothing……

You are a secret
A new possession
I like to keep you guessing…..

Been meaning to get a blog post in, but other things have taken priority.

was waiting for Me in My inbox Saturday morning. VERY NICE!  🙂  I haven’t even used it yet, but I’ll probably buy books and workout videos. Jim, you have always been generous over the years.

Satin Blouses!  I bought three new ones recently, same style, different colors. It’s so hard to find ones I like, ones that are fitted. One of them I wore in a video I shot today and will be posted tomorrow morning.

Speaking of updates, this was posted over the weekend:

I am on SUCH a nightgown kick lately. I got another one today that is so absolutely delicious!  It’s similar to this nightgown, that I wore in My “Mistress in Vintage Lingerie” clip, only the new one is in black:

BTW, if you are curious, that set above is vintage Olga and cost Me a pretty penny. But soooo worth it!
http://clips4sale.com/store/67321

A new week!  New videos to shoot!  I know I’ve been MIA here this past week, but I’ve just been enjoying My life. It’s rare that I have low key weeks and last week was one of them and I took advantage of it! Caught up on a bunch of stuff and actually had time to read. I love to read but I don’t usually have time to indulge that pastime, seems so many other things take priority.

And posted this over the weekend:

Picked up a few things at an adult toy shop over the weekend to use in upcoming videos. Still need to find a decent blow up doll, both male and female. I like to see what they look like before I buy and some of the male dolls don’t even have a dick!  I found a few online, but they are pretty ugly/weird looking. Hey….kinda like some of you!

Speaking of dolls, this reminds Me of some of show I saw a clip of online a while ago. I think it was from that “My Strange Addiction” show that’s on TLC (I think, I don’t know, I don’t watch TV).  Let Me do a quick YouTube search……found it!

Really?  Is it THAT hard to find a REAL woman to have sex with??  (Well, for him it probably is)  And there are actually MORE of these guys out there. I noticed a few related clips on YouTube and I think there was a clip (on Dlisted.com) about an English couple who were into real dolls.

So many freaks in the world and it only makes Me appreciate My amazing man so much more!